Anna sipped her breakfast tea and stared blearily at the headline printed on the front page of the morning paper. JJ, the editor of The Arendelle Guardian, stood behind Anna’s chair, with Kristoff and Michael’s sitting on either side to the queen, who was at the head of the table. JJ had been up all night working on the final printed edition, and she was waiting for Anna’s response to the headline: “MARKETS VOLATILE – SKAU-KROGH TO BLAME?”

“I’m going all in,” said JJ, her dark eyes glinting behind her spectacles. She crossed her arms as Anna scanned the text. “It’s time to frame this accurately and in a way that does Anna justice: Lars Krogh is out of control and a danger to the Crown. My reporters won’t brand him a traitor just yet, but there’ll be enough insinuations for people to conclude that he holds ill-intent against Her Majesty.”

“Big move on your part, Chief,” offered Kristoff gratefully, “one that even I wouldn’t have asked of your journalists.”

“You were an early investor in my paper,” said JJ. “You’re Arendelle’s true Princely House. Of course I back Bjorgman. It’s time Skau-Krogh is made a pariah, an embarrassment to do business with. He’s no longer just a trade rival to you. Harrison’s lend him a private navy, for Bjorn’s sake. Even the Fjord Times is getting skittish. The Chamber of Commerce has merchants that have contracts with both Bjorgman and Skau-Krogh. Every day, investors on both sides could get wiped out if any of Kristoff’s or Lars’ investments go bad now. Too much money, too much expansion, too much risk.”

END_OF_DOCUMENT_TOKEN_TO_BE_REPLACED 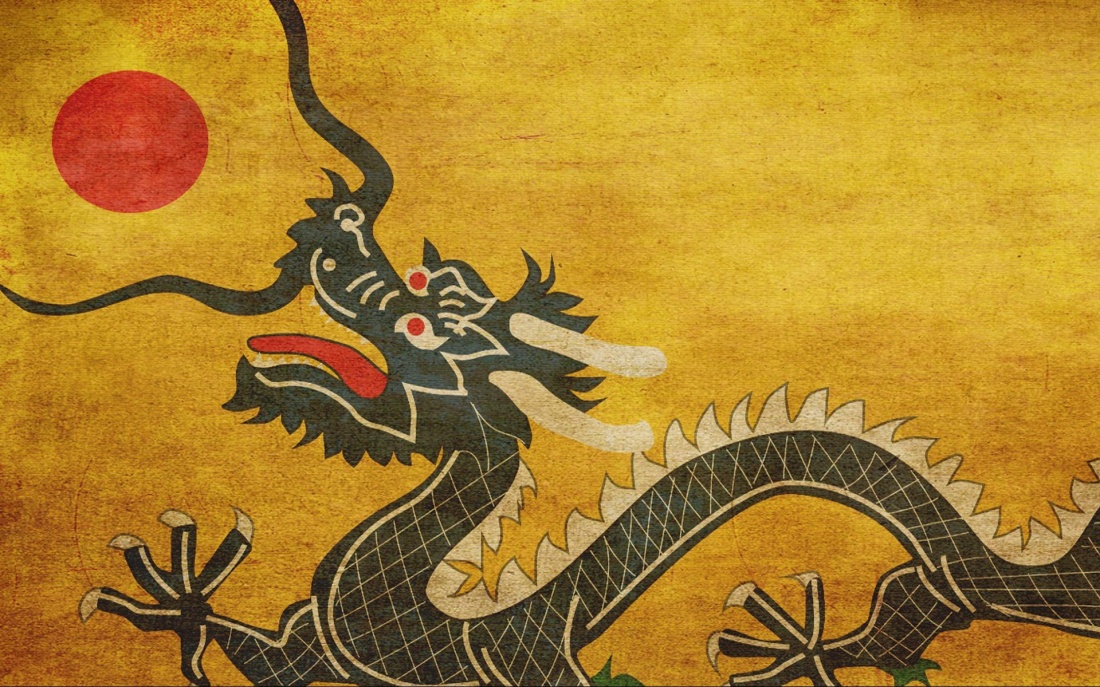 Warmest greetings to Your Imperial Majesty, the Daoguang Emperor!

I, Queen Anna, extend to the Great Qing Empire’s people the sincerest greetings and best wishes of the people of the Kingdom of Arendelle.

Since the reign of my predecessor and sister, Queen Emerita Elsa, Sino-Arendellian relations have flourished in a spirit of mutual respect and deepening understanding. Mutual trade is growing. Arendelle maintains neutrality in any conflict that the Great Qing is involved in. Much of this progress has been thanks to our family’s friendship with Your Imperial Majesty’s grandson and right hand, Prince Regent Yixin. He’s a master statesman and understands the position of Arendelle in Europe and in the world. He has been a reliable ally as we face the challenges of modernity together.

END_OF_DOCUMENT_TOKEN_TO_BE_REPLACED 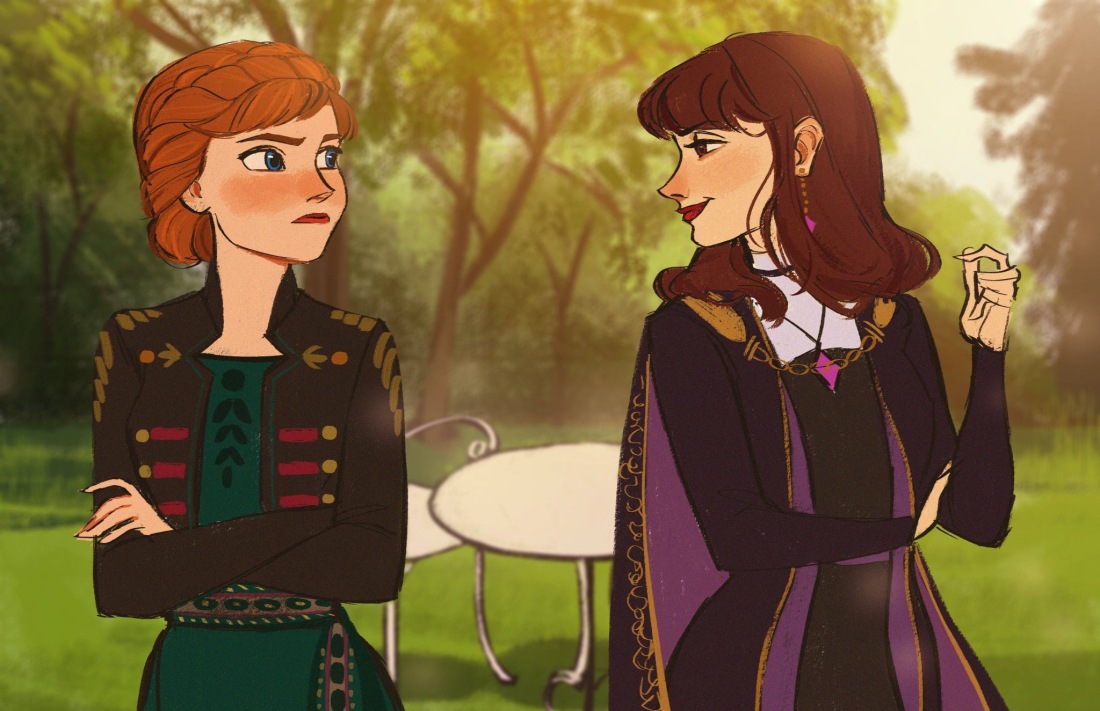 Arendelle Castle was heavy with dread and tension as the Countess’s ebony, heeled boots clacked down its hallways.

Two generations had passed since the last Mundilfari family head paid the royal home a personal visit. The most recent visitor was the late Lord Mayer Mundilfari, Viola’s grandfather. He had arrogantly swaggered into the palace and effectively intimidated the royal couple, demanding that Agnarr divorce Iduna. Although Agnarr never heeded Mayer, the fact that the latter could get away with such a humiliating insult, with all its racist undertones, was testament to Clan Mundilfari’s chokehold over Arendellian affairs.

It was the witching hour, and history was repeating itself. Tonight, the granddaughter of Mayer met Agnarr’s daughter on the royals’ home turf.

She knocked on the grand and elegant door of the drawing room, and an attendant bowed and opened it. Sitting on a wooden chair with a tall back, in front of the warm fireplace and before a long table with a plate of cookies, a teapot, and two elegant teacups, was Anna in her more tomboyish getup, complete with patterned blazer and sash.

END_OF_DOCUMENT_TOKEN_TO_BE_REPLACED

Citizens of Arendelle! You have no idea how strongly General Mattias was against me approaching you openly about what I’ve seen with my own eyes. He and I got into an angry argument in my study the other night about what I’m about to share with you in my column. From what I see in the pages of all Big Three papers, even this one, I guess our row was leaked to the press.

Destin was insistent that this puts our national security at risk. I hope that won’t be true, because I’ve blotted out and burned the name of its author. Besides, it’s not as if recent events haven’t got everyone talking already, especially after our war against the Southern Isles.

I love you, general, but I need to go public. Consider this an exclusive I’m giving this paper. Have a look at this.

END_OF_DOCUMENT_TOKEN_TO_BE_REPLACED

Like Anna, I’ve been stunned by the power wielded by those that seek to manipulate her throne. A while ago I fought Countess Viola on board Muspelheim (I look forward to our rematch one day, by the way). It’s no surprise why this newspaper and even a commercial rival, The Fjord Times, have gone after Viola for pretty much running a “shadow state,” complete with a private army, loyal to her aristocratic family and its cause rather than that of the monarchy and the state. Are we in still in feudal times?

I suppose that’s the royal conundrum Anna inherited from her predecessors: so long has Clan Mundilfari puppeteered Arendellian politics and life, Anna has had to work doubly hard to uproot this centuries-old influence. Yet moving behind the scenes, lobbying, negotiating, and power-broking – these activities, I’ve learned quickly, aren’t always bad things. In fact, they might sometimes be the only way things can get done around here. I like to think of myself as a straightforward and frank person, but given the situation in my homeland of Northuldra, we’ll need to do lots of negotiating.

END_OF_DOCUMENT_TOKEN_TO_BE_REPLACED

1. This proposal, if passed by the House of Ministers, and then the House of Jarls, binds Northuldra and Arendelle towards obligations that will result in an orderly and mutually beneficial re-integration between the two regions. The three core principles agreed between Her Majesty and Lady Maren, representing Northuldra, are:

2. This re-integration is a long-term initiative that may be accomplished during Queen Anna’s reign, or that of a distant successor’s.

3. Northuldra’s primary obligation is to quickly set up the necessary branches of government that will allow it to communicate with the family of nations, chief among them an executive, treasury, and foreign ministry. Arendelle will not interfere in Northuldra’s choice of government, whether it decides on monarchy, democracy, or republicanism. The span of time for Northuldra’s representatives to complete this can be negotiated with Queen Anna.

4. Arendelle’s obligation is to assist in Northuldra’s political reconfiguration, during which time its army and navy are to be deployed in the defence of Northuldra.

5. Arendelle will commit to fostering an active but sustainable and balanced economic relationship with Northuldra, in consultation with the tribes and peoples of the region.

6. The kingdom has already fulfilled its promise to provide Northuldra with an influential lobby and voice in the Arendellian government, by appointing a Northuldran-born Head Liaison of Northuldra-Arendelle Relations (a post currently filled by Honeymaren).

7. The final goal is the reconstitution of both Northuldra and Arendelle as a legally united, sovereign territory called Northuldra-Arendelle.

8. In the distant future, there will be a need to ensure that a sustainable political entity exists for both region’s peoples. Queen Anna and Honeymaren propose that the physical territories of what are currently known as the Kingdom of Arendelle and Northuldra each be reorganised as “Geographically Autonomous Lands” (GAL), both of which remain independent but share one destiny and common interests. Legally, the two GALs of Northuldra-Arendelle will not constitute provincialism, federalism, or unionism. Each GAL will chart their own way, but with the assurance of each other’s protection and assistance. This proposed arrangement is geared towards maximising both sovereignty while binding both closer together.

9. This bold yet practical proposal offers to both Arendellian and Northuldran peoples a unique partnership that reflects the special relationship between sister-queens Anna and Elsa. Her Majesty and Maren urge that this bill be passed so that the government can move quickly on the work of serving the people.

Put forward in this session of parliament, on this day of our Lord, 1842.

Her Majesty’s column is published in both the morning and evening editions of The AG.

You might have heard the news the other day: our Northuldran embassy has finally finished construction! Honeymaren’s moving out of Arendelle castle after several very happy months with me. A while ago, she came to stay with me on Elsa’s recommendation, after I visited Northuldra one starry night to discuss with my sister the future of our two realms. Who better than Honeymaren, Elsa suggested at the time, to help me steer the gradual integration between our mother’s homeland and our father’s kingdom?

The new embassy is a short walk from Oaken’s shop and has a comfortable apartment above its offices, complete with a fireplace and a nice open space for a small dining table and bed. I’ve asked some Northuldran friends to send over some textiles and decorations so that the loft will feel a bit more like home for Maren.

And I’m proud to announce to you that I’ve formally appointed Maren as Head Liaison of Northuldra-Arendelle Relations. She was sworn in by my ministers in the early hours of yesterday morning.

END_OF_DOCUMENT_TOKEN_TO_BE_REPLACED

Her Majesty’s column is published exclusively by The AG. This piece was reprinted from our last morning edition.

Well, after many days of Viscount Palmerston long overstaying his welcome at the palace, I’m pleased to tell you that I signed with him a concordat.

There will be no war with the British Empire, and nor will either country be seen to be the loser. I successfully convinced him to make an example of the East India Company for their attack on our Bjorgman House ships – it was quite a gamble! I’m still new to this diplomacy thing, but what I needed to do was convince him that Arendelle and Britain have no reason to go to war, but every reason to punish the EIC.

I was armed with plenty of news reports, many of them supplied by journalists employed at this very paper, of the EIC’s corruption, greed, and venality in the princely states of India – that they were brutalizing the local population, sucking up British government subsidies, and paying little to no taxes to the state coffers. Honestly, I don’t think the British foreign secretary cared a jot about the first matter, but the other two, very much so.