By Floki, Trade and Seafaring Correspondent for The AG

After several months of sailing, a multinational, five-ship fleet of Japanese, Dutch, and Zarian traders arrived in Arendelle’s dockyards this morning at daybreak.

Representatives of Bjorgman House, the largest ice company in the kingdom, were present to welcome the kingdom’s tired guests, and General Mattias’ first company of ships fired a cannon salute.

The guests will be guided to their lodgings, after which they will lunch with Her Majesty at the palace. Queen Anna will host a week-long trade fair at Arendelle Plaza near the docksides, showcasing the kingdom’s friendly relations with the Tokugawa Shogunate and the burgeoning trade between Arendelle and states far to its east. A range of different products and services will be showcased, generating new business opportunities for merchants of all trades, from shipping, textiles, food, tea, and much, much more.

Her Majesty was also quick to point out, in a memo to Arendellian and Japanese businessmen, that Arendelle would not follow the example of other nations in seeking extra-territorial rights for her own merchants travelling to Yokohama, in a gesture of respect for the Shogunate’s anger at European treaty demands. “Trust can only be built when there is trust to begin with,” she wrote, “so I have faith that our traders will not be unjustly harmed or detained under Tokugawa law. Unlike the Dutch and Portuguese, we are stridently anti-imperial and accept Japanese sovereignty within the Shogunate’s borders, just as our guests are subject to Arendellian law during their time here.”

One disembarked guest that has set Arendellian high society aflame is a charismatic Japanese lady with the French name of Camille Donnadieu. Calling herself a geisha, Ms Donnadieu’s attendants were at pains to point out to her Arendellian admirers that geisha in her home country are respected entertainers. Our journalists were informed that the most prestigious geishas‘ art, conversation, and company are sought by Japanese nobility and gentry. Reporters at The AG (and from other papers like the Fjord Times and Snow Herald) are unsure of her social station and background in Japan, but some of our correspondents have heard gossip from the ships that she was found and raised in a Parisian orphanage before being sent to one of the most prestigious geisha-training houses, or okiya, in the imperial capital of Kyoto. 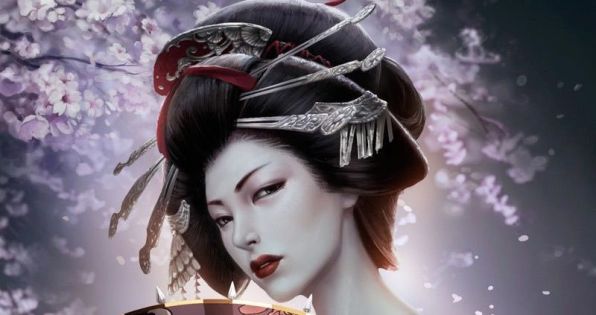 How this new arrival will shape celebrity gossip during the time the Tokugawa trade delegation is in Arendelle remains a matter of feverish interest among our society reporters, with potential new trends in culture, arts, and even fashion and fine taste to come.

Despite his genial greetings for the ships’ captains, General Mattias made no secret of his strong hope that there are no spies or agents of the Shogunate on board any of the vessels – with a pointed look at Ms. Donnadieu, whose coterie of hangers-on seemed deeply offended by.

Camille’s unexpected arrival with the trade delegation coincides with fast-moving international developments for our realm under Queen Anna. The world is moving faster and faster into an integrated whole, with both exciting and highly perilous ramifications for a small kingdom like ours. Her Majesty has been under major pressure herself, from a dangerous encounter with the British East India Company to lobbying for an alliance of smaller nations as a counterweight to the global maritime empires dominating world trade.

With a meeting with Queen Victoria herself now imminent, Her Majesty must use this opportunity with the delegation to hone her political savvy and build her international friendships. Our editor urges that Queen Anna stay on her current path – outward-looking and unafraid to engage with other states and accelerating technology, but also unyielding when standing up for Arendelle in the face of colonial powers.

Stay updated about the Yokohama trade fair in Arendelle with The AG’s morning and evening editions!

View all posts by MMythos